What do Masters And Johnson and The Tuckman Model Have In Common?

Home/Uncategorized/What do Masters And Johnson and The Tuckman Model Have In Common?
Previous Next

What do Masters And Johnson and The Tuckman Model Have In Common? 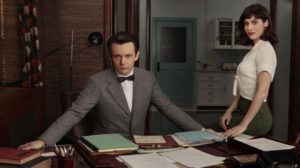 Part of the drama of the HBO hit series “Masters of Sex” was in Dr. William Masters initially taking all the credit for the research, even though Virginia Johnson (who he later married) had long been working with him as a partner on the study.

This gives their juicy story an underdog element that makes us root for Johnson, played in the series by Lizzy Caplan. But the story of another hidden figure who should have gotten more credit can be found in the archives of the less sexy world of Project Management (and for my PMP followers, YES, this could be on the test!)

First published in 1965, “The Stages of Team Development” (today known as the Tuckman Model or Tuckman Ladder) states that for a team to become productive, it must go through four phases: (1) Forming, (2) Storming, (3) Norming, and last, (4) Performing. Performing, of course, is the phase you want to get to, where the team is actually creating the deliverables of the project.

In 1977, 12 years later, Tuckman and Mary Ann Jensen together added Stage 5: Adjourning. This is considered a key addition, identifying the importance of performing proper completion procedures and release of resources at project end. Jensen WAS credited for her shared her role in identifying this stage.* But her name has been largely lost in the shuffle.

How Did I Learn About Mary Ann Jensen’s Forgotten Role?

I wasn’t always ‘woke’ about this issue! One day, in the middle of giving a PMP Prep class at Fort Hood, one of my Army students raised her hand and politely pointed out that I had neglected to credit Mary Ann Jensen for her part!

And when I went back to double-check the Tuckman Model in the PMBOK Guide* (Project Management Body Of Knowledge, from PMI), I saw that the fifth stage (Adjourning) IS included in the Guide. But that Mary Ann Jensen’s name IS NOT!

Action Item – I will be submitting a request to PMI asking them to credit Mary Ann Jensen as co-creator of the 5th Stage, in the next release of the PMBOK (and I’ll update this blog with their response).

“I have reached out to our product editor to have Mary Anne Jensen’s name referenced for her contribution to the Tuckman ladder and this will be corrected in the next reprint of the standard.” — Kristin Vitello, Standards Product Specialist, PMI, Feb. 14, 2018

(36 out of 36 Five-Star Amazon Customer Reviews)